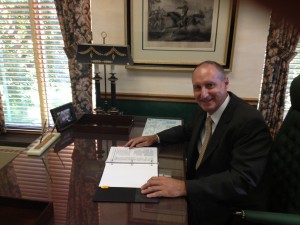 Anthony J. Fiore serves as our CEO and Managing Partner. Prior to founding V2B, Mr. Fiore was a career Army officer, with experiences ranging from combat in Iraq to working at the most senior levels in the Pentagon.

He brings over two decades of Department of Defense related experience to the company. Throughout his military career, he has served in senior level positions on both the Army and Joint Staff to include assignments in the immediate Offices of the Secretary of the Army and the Chairman of the Joint Chiefs of Staff. He also served as an Assistant Professor in the Department of Social Sciences at West Point. His background includes extensive experience in international affairs, policy planning, strategy formulation and resource and requirements and overseas assignments in Germany, the Middle East, and Spain. In 1995 he received a Master’s Degree from the School of International and Public Affairs at Columbia University and in 1985 he received his undergraduate degree from the United States Military Academy at West Point. His executive education is from the Massachusetts Institute of Technology. He is a member of the Honorable Order of Saint Barbara, a combat veteran with a Ranger Tab, and a member of the American Legion Economic Commission Small Business Task Force.